A Broadway Run For ‘Bronx Bombers’ 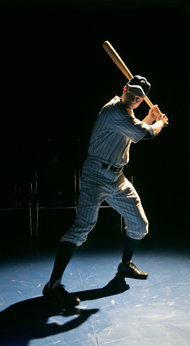 “Bronx Bombers,” a play centered around the Yankees and some their biggest stars from the last century, completed a short Off Broadway run on Saturday. But the producers are to announce on Monday that a move to Broadway is set for January with the actors Peter Scolari (“Lucky Guy”) and his wife, Tracy Shayne (“Chicago”), taking over the roles of Yogi and Carmen Berra from Richard Topol and Wendy Makkena. The rest of the cast from the Off Broadway production — which included Christopher Jackson as Derek Jeter, Francois Battiste as Reggie Jackson, and Chris Henry Coffey as Joe DiMaggio — will return. Previews of the play, written and directed by Eric Simonson, are set to begin on Jan. 10 at Circle in the Square Theater with an opening night on Feb. 6.